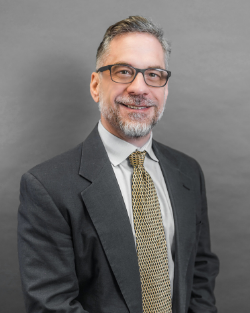 Dr. Jerald Winter joined Digestive Health Specialists in 2018. Raised in Florida, he has been a resident of Winston-Salem since 2002. He received his medical degree from Bowman Gray (Wake Forest University) School of Medicine in 1995 and was chosen for membership in Alpha Omega Alpha honor medical society. Dr. Winter completed Family Practice Residency in 1998 in Spartanburg, SC, and served four years in the USAF as a Family Physician at bases in New Mexico and Turkey. Following honorable discharge with the rank of Major, he then completed Anatomic and Clinical Pathology residency at North Carolina Baptist Hospital, Winston-Salem in 2006.

Dr. Winter provided pathology services at several regional hospitals before serving as technical supervisor of Anatomic Pathology for Quest Diagnostics Laboratory in Greensboro, NC. Board-certified in Anatomic and Clinical Pathology with a special interest in GI pathology, he is Medical Director of the Pathology Laboratory at Digestive Health Specialists and a member of the College of American Pathologists, the United States and Canadian Academy of Pathology, and American Society for Clinical Pathology.

Please Rate Your Recent Experience With Us!